THE FACT IS NOT NEW AT ALL. I will neither be the first nor the last who discovers quite puzzled that an own photograph –or some other work subtject to copyright– has been reproduced and signed with someone else’s name. That situation have nothing to do with sharing or spreading, since when someone removes a signature and places another watermark, we are actually in front of a fundamental right violation.

The two of us were beside the bus stop at the southern side of Columbus Square. I have showed the journalist card to a traveller to justify that we were video-recording the FC Barcelona parade and the place where he has climbed would be undoubtedly useful to us. After making an annoyance expression, the tourist gave up the seat and the camera operator jumped on it. And, while he was shooting the players arrival and the drumming preceding the retinue, I got the cellphone out to take some photographs.

With the first picture, I immortalized two FCB supporters wearing the 10 and waving flags, while Columbus, so static, seemed to show them that the players were coming and almost there. To take the second photograph, I aimed on the other side of the bus stop, looking for the vanishing point throughout the Columbus Promenade, while Castellers the Sants were raising a human tower and colored confeti was raining over the clamor. And that flag, with the Barça badge in the middle, frozen for ever. 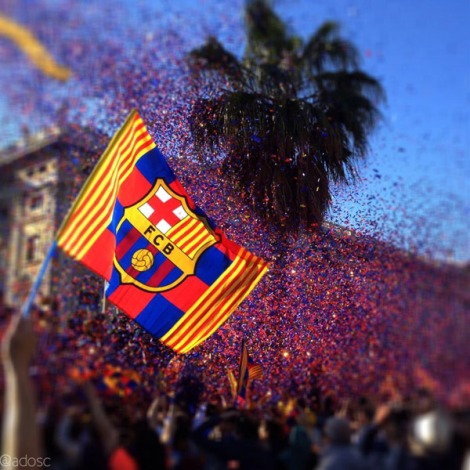 I quickly uploaded those pictures to my Instagram account (@adosc) and then some friend shared them on social media, as it is usual and logical. Or was not it a newsworthy event that awaken interest, admiration and passion? What I would have never expected was, as I have discovered this morning, that another Instagram user, specifically @fcb_supporters (who also is on Twitter), had uploaded my picture, not only without mentioning the author (@adosc) but having resized the image to remove the name and signed as it was him. That is what I have notified on my network:

Facing that situation, I have adressed him just to argue this: “This is my picture. At least, you could have mentioned the author. I ask you, please, for writing my name and not yours, or just remove the photograph”. His response has been: “This picture is not mine, but I have the right to upload it”. All right up to here. Nevertheless, erasing my signature and writing down his name he has committed a copyright violation.

The lawyer Martínez-Rogés has confirmed that and even Instagram communities have suggested me to denounce the fact. Pilar Junyent, a recognized instagramer that has taken photographs for some celebrities and several sort of evets, told me this afternoon that she also has suffered the same situation and advised me to ask the user @fcb_supporters to rectify; what is also suggested by Instagram, as a step before denouncing, and that is also written on the application website:

As a response to my request, @fcb_supporters has added: “If Instagram administrators ask me to remove it, I am going to do so, otherwise I won’t”.

Therefore, I think that I must proceed with the denouncing, although that bothers me. However, I have never been able to stand neither people that attributes somebody else’s feats, nor the classmate who proclaimed an idea as his own when it had resulted from a teamwork, nor the instagramer that captures the cellphone screen and signs someone else’s picture.

As I have stated in the beginning, I have not been the first. The photograph and journalist Sion Fullana discovered, a year ago, that @VogueSpain had taken two of his pictures and the story was spread quickly. Fortunately, most of instagramers, photographs and journalists tend to appreciate some other people’s work, are supportive and rally round.

Shameless conduct by @voguespain on #Instagram stealing my photos (1): Is this what a magazine of such name should do? twitter.com/SionFullana/st…

The Guardian reported this case and others, such as Mango and Instagram users that captured and uploaded images that didn’t belong to them.

@mango Please contact me. You use one of my images without my permission. REF. 73208426 – FIELD. Orginal image: tuana.se/portfolio/the-…

The fact shows once more that human being still have further to go as a society. We just could start calling for some “respect“, often so scarce, althouh Aretha Franklin made it so popular in the sixties… “Just a little bit!”

ADOSC, that is just A2C, means Audiovisuals Creative Communications and Aleix Cabrera Curto as well. Discovering #SocialMedia every day and working on it, helping people and enterprises to use it to improve its own brand and reputation, not only by words, but also video, photography and sound.