I DO NOT DISCOVER anything new if I state that the media has not got away from crisis. A dramatic fall in advertising investment, the technological restructuring of the sector and the state financial problems have placed TV channels, radio stations, press and digital media between the devil and the deep blue sea, and the mere worker is the first to suffer the consequences. To make evident this trend and try to stop it, or even revert it, media workers, especially journalists, have come together for the first time in response to Mitjans en Lluita coordinating committee call. 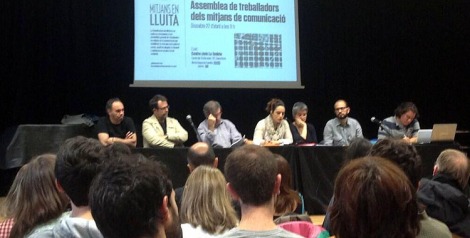 Unemployment in Journalism trebled in just a year, reaching 27.443 unemployed people in September of 2012, according to the Annual Journalism Report 2012. This reality and the precariousness of this sector are what most concern the survey respondents. The following worries are the low salaries and the lack of political and economical independence. Despite the ugly truth, year after year, journalists and communicators carry on graduating in more than twenty faculties spread throughout Spain –in 2012, near 2.000 students graduated.

The assembly have referred to the distressing scene in the Civic Center La Sedetaof Barcelona, but also in the network, via Twitter and the hashtag #MitjansEnLluita. About one hundred of people have gathered there and paradoxically just one camera has recorded the meeting. Workers from several media groups, such as Televisió de Catalunya, Catalunya Ràdio, Catalan News Agency, La Xarxa, Cugat.cat, El Mundo, El País, Sport newspaper or Atlas, that is to say Telecinco and Cuatro, have given examples of the work situation lived in each media, for example Headcount Reduction Plans, decreasing or freezing salaries, subcontracting, fake freelances or using interns as workers but without paying a salary.

The journalist Jordi Mumbrú ha recalled how Público newspaper wrote the foreword of the media drama, but illustrating the audience with a positive fact: some great initiatives have emerged from it, such as @RevistaMongolia. However, this does not mean media professionals must be steady, indicated another journalist, Sergi Picazo, some minutes ago: “We cannot fight alone, HRP after HRP. If media owners come together, we will do as well”.

As regards the call to action, the assembly considered that all this sector should join a demonstration settled for the first saturday of May, and also suggested to edit a newspaper to inform about the media workers reality and  s first of May.

In the end, the assembly has created five working groups for communication and material, extension, actions and contents, and has approved to participate in a demonstration with some other public services, next sunday, as they announced on their blog.

ADOSC, that is just A2C, means Audiovisuals Creative Communications and Aleix Cabrera Curto as well. Discovering #SocialMedia every day and working on it, helping people and enterprises to use it to improve its own brand and reputation, not only by words, but also video, photography and sound.